what for?
why?
get engaged
sponsoring
and active help

The duo of the two Swiss Markus Eichenberger, clarinets, and Daniel Studer,bass, has existed for over eight years and amazes by drawing its tension from the reduction.

"[...] This is not about a flow of music, but about moments that are contrasted with each other in a reserved, fine dialogue, in an almost tender language. Again and again there are moments of absolute silence in the pieces.

The two musicians find themselves in a common breath, as in an expressivity of the greatest discipline. The result is a magical space to which the bass – mostly bowed –  and the clarinet indulge and they let each other.
Not the lute is in the center, but, at least for the most part, the delicate, the unfamiliar. For both musicians are not content with ordinary sounds - in keeping with their musical nature - but explore the range of unorthodox possibilities of their instruments on an artistically high level and for our own enjoyment."[Steff Rohrbach, Jazz'n'more, 2018]

With the trumpeter Axel Dörner, the duo has brought a musical free spirit into the boat, which can probably contribute equally to increase the complexity and surprising dissolution of the same. 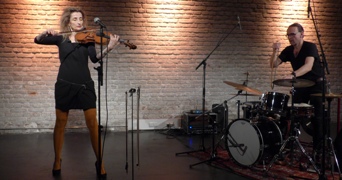 Charlotte Hug´s speciality is a blend of viola and vocals, which has given rise to her distinctive tonal language, with an enormous range of expression.

Lucas Niggli is a master of timbres on drums and he is one of the most versatile and independent drummers in Europe.

The two cosmopolitans are not shy to create every imaginable world of sound with their instruments. Their imagination and their communication skills are the key to free, yet very precise improvisation music free of dogmatic limits. The result is a virtuoso, direct and yet opulent-sounding duo music with the two most archaic instruments in music: the voice and the drum.

A versatile, highly agile performance that goes deeply under your skin.

The Remote Viewers cultivate a unique balance between jazz and composed chamber music. Over the years, they have developed a special aesthetic with a high recognition value, which has made them one of the most relevant and consistent voices in the world of contemporary music.

From its beginnings as a three-saxophone unit in 1997, The Remote Viewers, the peculiar brainchild of tenor saxophonist David Petts, have sometimes included six or seven members at a time, at times significantly expanded to include the voice and lyrics of Petts' wife Louise Pett.

The current formation consists of alto and soprano saxophonists David Petts and Adrian Northover, and bassist John Edwards. They have released two albums - Last Mann in Europe (2017) and Notes Lost in a Field (2019) - and will be performing material from their next release, The Remote Code.

We are very happy about the Federal Prize APPLAUS, again awarded to us by the German Minister of State for Culture and the Media, Prof. Monika Grütters.

After 2014, 2016 and 2017, this is now the fourth award of our concert program, which makes us happy and proud, and which enables us to present some more musical adventures in 2020 – like this concert.

Spirale is an improvising duo consisting of saxophonist Bruno Angeloni and percussionist Steffen Roth. Both based in Leipzig, they work on their own musical language to communicate a progressive way of thinking and a freedom in life, which they experience in playing. Since 2017 their conversations take place in all kinds of spaces which support improvised music. This includes clubs, galleries and festivals as well as self-organised cultural projects.

The musical vita of saxophonist Bruno Angeloni (born 1955) might lead to prematurely labeling him a free jazz player. For example, he played with Reggie Workman, Andrew Cyrille and Michael Zerang. Be warned of this “limitation”: you would miss Angeloni's wonderful sense of form and his wise phrasing.

Steffen Roth (born 1989) studied jazz / rock / pop with drums as a major at the Dresden College of Music. He then completed the master class with Michael Griener and Eric Schaefer from 2015 to 2017, supported by a graduate scholarship from the State of Saxony. Based on the free scene in Leipzig and Dresden, Steffen Roth works solo, in duo to big band formations, on musical and formal shifts in boundaries.

"[...] The percussionist seemingly fuses chaos and order and it’s here, in this mix of free improvisation and repetition, tension and catharsis that the ‘opening’ comes to light and the whole performance become a transformative experience." [Giulia Ponzano on the solo performance at the beim International Short Film Festival Oberhausen 2018]

SWQ is a journey into the vast universe of sound, where one rambles, resolving into a billow of sound that evolves into different shapes and densities.

The instruments are the source of a variety of sounds and noises, which are not necessarily recognizable as a saxophone, bassoon, trumpet, bass or drum.

"That instrumentation suggests a conventional jazz group, but that illusion ends with the first note. The focus is less on line than on the minutiae of sound magnified to a central place in the music. [...], all of it possessing an underlying force varying from piece to piece but that can suddenly take on extraordinary momentum without the appearance of a conventional musical line. [...]"[Stuart Broomer, The New York City Jazz Record April 2016]

A rare opportunity to listen to three master improvising musicians!
Masahiko Satoh (piano), Roger Turner (drums) und Otomo Yoshihide (guitar) first met and played at the legendary Hall Egg Farm just outside Tokyo in 2015, a performance which was subsequently released on the Relative Pitch label under the moniker of the SEA Trio. The immediate chemistry and hypnotic interplay is obvious from that first performance, so this is supposed to be an unmissable night.

The virtuoso double bassist and composer Max Johnson presents his latest trio with Anna Webber (saxophone, flute), a Brooklynite by way of British Columbia, whom Peter Margasak from Chicago Reader described as one of the most exciting new arrivals on the New York avant-garde jazz scene in the past couple years. Another member is Michael Sarin (drums), who has been at the center of New York City’s genre-bending jazz and improvisation community over the last twenty-five years.

They are performing all new music, drawing from chamber music, free improvisation and the traditional jazz trio sound. Between the three of them, they have worked with artists such as John Zorn, Anthony Braxton, Mark Dresser, Jen Shyu, William Parker, Simon Nabatov, and this project highlights the individual sounds and experiences of these three unique voices, as they interpret this breathtaking music in a singular way that is truly their own.